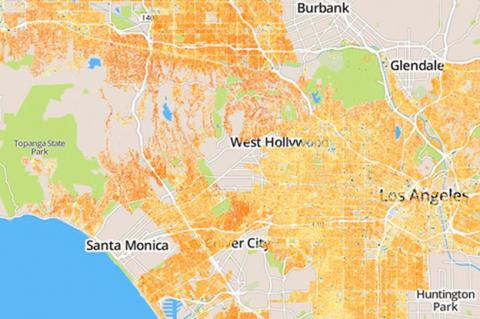 How cool is your roof? If you live in the California cities of Bakersfield, Long Beach, Los Angeles, San Francisco, or San Jose, you may be able to find out.

Scientists from the Department of Energy's Lawrence Berkeley National Laboratory (Berkeley Lab) have created an interactive map that displays the solar reflectance (also known as albedo) of individual roofs in these five West Coast cities.

You can check out the map at AlbedoMap.lbl.gov.

The map is intended to help homeowners and commercial property owners better understand their roof reflectance. It's also intended to help policymakers visualize the albedo of each city's current roofing stock, and inform the development of policies that could lead to cooler cities.

It was developed by cool roof experts in Berkeley Lab's Heat Island Group, which is part of the Environmental Energy Technologies Division, with help from Berkeley Lab's Public Affairs Department. The California Air Resources Board funded the research behind the map.

What exactly is albedo, and why do scientists want to map it? Albedo is the fraction of sunlight that is reflected from a surface. It is measured on a scale of zero to one, where higher numbers indicate greater reflectance and a cooler surface.

"The benefits scale with the increase in albedo that can be attained using reflective roofs," says Ronnen Levinson, who is head of Berkeley Lab's Heat Island Group. He developed the map with George Ban-Weiss, who is now an assistant professor of civil and environmental engineering at the University of Southern California; Jordan Woods, now at the University of California at Los Angeles; and Berkeley Lab's Haley Gilbert and Dev Millstein.

"To assess these potential benefits for a particular city, we need to measure the reflectance of its roofs with good spatial and spectral resolution. Our map helps bring this into focus," says Levinson.

Los Angeles, for example, recently implemented an ordinance that requires all new or refurbished residential buildings to be equipped with cool roofs. The potential dividends of the ordinance are illustrated by the swaths of red and orange roofs (indicating low-albedo roofs) in the Los Angeles portion of the map. If much of the city's roofing stock became more reflective, buildings would be more energy efficient, and the city would likely be cooler and more comfortable in the summer.

The Berkeley Lab scientists developed the map using data collected in summer 2009 by the National Agriculture Imagery Program (NAIP) of the U.S. Department of Agriculture. NAIP imagery is available to the public. An airplane-mounted sensor measured light intensity in four narrow spectral bands—blue, green, red, and near-infrared—at one-meter spatial resolution. These four-band aerial images were originally acquired for the NAIP. For accuracy, the Berkeley Lab scientists used a radiometrically calibrated version of the NAIP imagery.

After various corrections were made, such as accounting for light scattering in the atmosphere, individual rooftop pixels were isolated, and the albedo of each roof was estimated. The results were calibrated and "ground-truthed" using laboratory measurements of the spectral reflectances of hundreds of roofing samples, and pyranometer (sunlight meter) measurements of rooftop albedo. Streets and parking lots were excluded from the analysis.

"To our knowledge, this is the first study to estimate the albedo of rooftops at the scale of entire cities," says Ban-Weiss.

It is important to note that rooftop equipment, such as solar panels or HVAC systems, was not distinguished from the roofing material and was included in the albedo estimate for each rooftop. There is also associated uncertainty in the reported albedo for each rooftop, especially for high albedo roofs. For more details on methods, uncertainties, and further analyses and implications, see the CARB report.

The map also shows modeled decreases to air temperature on a summer afternoon in Bakersfield and surrounding areas if cool roofs were installed on the city's homes and businesses. A regional climate model indicated that cool roofs alone would lower average afternoon temperatures by up to 0.2 °C in summer and winter. Further cooling could be attained with reflective pavements and shade trees.

Lawrence Berkeley National Laboratory addresses the world's most urgent scientific challenges by advancing sustainable energy, protecting human health, creating new materials, and revealing the origin and fate of the universe. Founded in 1931, Berkeley Lab's scientific expertise has been recognized with 13 Nobel prizes. The University of California manages Berkeley Lab for the U.S. Department of Energy's Office of Science. For more, visit www.lbl.gov. Berkeley Lab is supported by the Office of Science of the U.S. Department of Energy.

The Office of Science is the single largest supporter of basic research in the physical sciences in the United States, and is working to address some of the most pressing challenges of our time. For more information, please visit science.energy.gov.