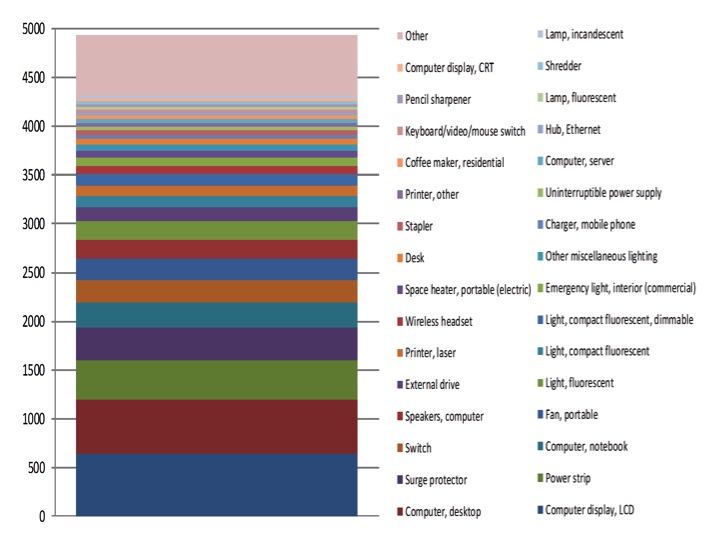 'Other' is the fastest growing energy use in residential and commercial buildings—devices such as computers, displays, printers and other office equipment, as well as small household appliances ranging from kitchen electrics like coffee makers, toasters, and mixers to fans, clocks and portable space heaters. To energy researchers these devices are known as miscellaneous and electronic loads (MELs), and about one-third of end-use electricity consumption in homes and commercial buildings is attributed to them.

Hundreds of devices fall under the MELs category, and their energy use is not well-understood, in part because of their great variety, and because the sensing technology to measure these individual loads is expensive ($200 to $300 per metering point) and cumbersome to install.

Researchers in the Environmental Energy Technologies Division (EETD) of Lawrence Berkeley National Laboratory (Berkeley Lab) have teamed with the University of California, Berkeley to study MELs, to better characterize the variety of MELs and estimate their load growth, and to develop better inexpensive technologies for monitoring them. EETD's Steven Lanzisera and Rich Brown have been leading the effort to decipher MELs impacts on buildings

Understanding and reducing the energy use of MELs is a significant problem. The buildings industry is working towards designing, building, and operating very low to net-zero energy using buildings, and the load growth of MELs is pulling energy use in the wrong direction. Knowing which devices use the most energy, and what their load profiles look like—that is, how their energy use fluctuates throughout the day—will help researchers, and ultimately, manufacturers, building operators and homeowners, understand how to better manage the energy use of MELs.

A connected, networked building would give energy managers data that could help them better manage energy use efficiently, and maintain comfortable, healthy conditions inside a building. Sensor technology has been advancing to the point where Berkeley Lab researchers could use it to study miscellaneous electrical loads at a very fine level of resolution.

"We felt that recent developments in wireless sensor networks would allow us to develop a MELs field study that was relatively low-cost, reliable, and allowed metering all the MELs devices in a home and a representative sample in a commercial building" says Lanzisera. "In the long run, we hope to develop field metering techniques that are more cost-effective and allow more frequent meter readings over longer time periods."

The UC Berkeley team members developed an open wireless sensor network platform called ACme (Alternating Current meter). These meters provide data readings as frequently as every 10 seconds, are accurate to about 0.5% of the reading, and wirelessly transmit the data back to a central database. Because they are based on an open platform, they could be adapted for any project.

The ACme nodes, less than three inches long, are plugged into outlets, and the device to be measured is plugged into the nodes. The ACme nodes form a mesh network that cooperatively sends data packets to a router that communicates power data wirelessly over the Internet to a computer. Each node used in the study cost about $80, and used about 1 Watt of power, so the network added very little to the building's electric load.

The Berkeley Lab-UC Berkeley team measured energy use of MELs in one commercial building, and three homes. They set up a network of ACme nodes in an 89,000-square foot building at Berkeley Lab, an office building typical of older commercial sector structures, housing about 450 occupants, mostly in traditional offices and office cubicles. The team went from office to office, creating a database of every MELs device in the building—about 5,000 total. It took two people about two weeks to complete the inventory, which is shown in Figure 1. The most common devices were computers, computer displays, and other peripherals such as printers and external drives.

Then the team installed 460 ACmes throughout the building on slightly less than 10 percent of the MELs. Their goal was to get a representative sample of MELs from every floor, and every working group, and a wide range of device types.

Three homes formed the residential sample of the their study, two existing homes in Oakland, California, and one new net-zero energy home in Boston. The research team installed 75 to 80 meters per home.

Based on several months of metering, Figure 2 shows some results of energy use and device count for the five most common—computers, displays, imaging, lighting and network devices on one floor of the office building.

The tremendous richness of the wireless sensor network makes many kinds of analyses possible. For example, in Figure 3, 73 computers are sorted by the fraction of time they stayed in "on" mode, and Figure 4 shows the same distribution for 122 displays. The conclusion is that most computers are in the "on" mode almost all the time, but a significant number of computers also are powered down much of the time. Meanwhile, displays in this building are rarely left on. Information like this available to a commercial energy manager could motivate simple operational improvements, such as asking the user of computers never turned off to enable their energy-saving low power mode.

The research team is now developing extremely low-cost methods to measure electricity use of electronics. Berkeley Lab, ARM and Power Integrations have demonstrated a method of measuring the power output by a switching power supply (like those used in all electronic devices) that adds only pennies to the device cost. This capability could be added to every electronic device manufactured enabling rich data in buildings.

"We are also working with the efficiency community and device manufacturers on strategies to reduce the energy used by electronics such as computer, audio, and display equipment," says Lanzisera. "This work includes developing advanced controls as well as reducing power use while these devices are operational."

This research was funded by the U.S. Department of Energy's Office of Energy Efficiency and Renewable Energy.