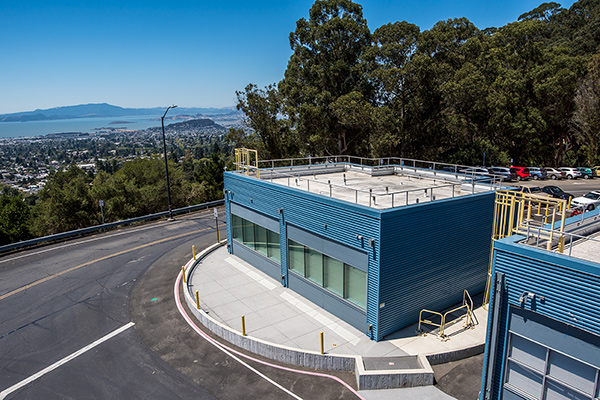 Researchers at Lawrence Berkeley National Laboratory are celebrating the second anniversary of the Department of Energy's FLEXLAB®, one of the world's most advanced facilities for studying the energy performance of building systems.

Jerry Meek, energy and sustainability manager for Genentech, used FLEXLAB to measure potential energy use in a new office building at the biotechnology company's South San Francisco location. It was so successful in predicting energy use that Genentech is considering another FLEXLAB contract.

"Basically, all of our testing — for employee comfort, visual and thermal considerations — was done before the building was built," Meek said.

Some highlights from the Genentech project:

An innovative characteristic of the Genentech building is that it has no private offices. Workspaces are set up based on individual employee needs, rather than confining a worker to a particular space. When a need arises — whether it's for a private telephone call, a conference room or computer work — the space is available and it is in the best energy-use location for that function. The FLEXLAB team was able to model the characteristics of a typical open work space and make smart energy recommendations.

Users, including private industry, can test energy-efficient building systems individually or as a unit, under real-world conditions.

The FLEXLAB test cells can test a wide variety of building components and systems in any combination, including:

Singapore is particularly interested in FLEXLAB and consulted with the team here to build its own similar operation, Skylab, at the top of a six-story building in Singapore. Multi-year consulting work continues in this collaboration.

Projects for 2017 include nine projects — five for DOE-funded work and four for industry, the California Energy Commission and public utilities. In addition, the FLEXLAB group will be developing flexible, networked lighting control systems. New capabilities for FLEXLAB include the addition of solar panels and battery storage. These additions will allow user to integrate renewable energy systems and storage in building operations.

FLEXLAB is the latest in Berkeley Lab's long line of game-changing energy-efficiency innovations.