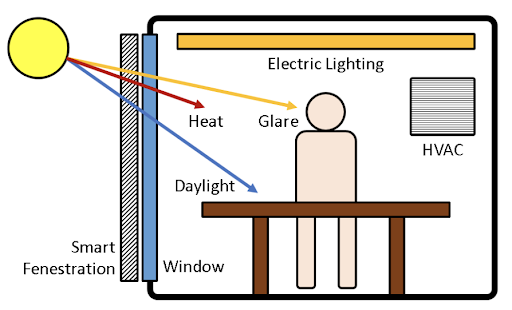 Smart fenestration systems such as automated shades or smart windows can autonomously manage glare and solar heat gains which not only reduces electricity bills by up to 30% while cutting peak demand in half, but also improves the health and well-being of occupants. Now, Berkeley Lab researchers have launched a key component for making these systems easier to install in buildings.

That key component is an automatic control system that actually anticipates environmental conditions and considers the unique complexity of a building's structure in its use of smart fenestration systems.

The now-publicly available advanced fenestration controller (AFC) is easy for users to configure and deploy, and accounts for the integrated system of smart fenestration, lighting, and building controls to produce safe and healthy living environments.

How the Advanced Fenestration Controller Works

The daily movement of the sun and the varying intensity of its rays can cause a wide range of heat, daylight, and glare in a room. And while a light-filled space delivers a host of health and well-being benefits to its occupants, it can equally cause excessive strain on both the electrical grid and a building's heating, ventilation, and air conditioning (HVAC) system, resulting in increased costs and emissions. The AFC technology strikes a balance between those benefits and tradeoffs.

The AFC relies on model predictive control (MPC), where the system to be controlled — such as a building with smart fenestration — is represented as a mathematical model with reduced complexity. Additional mathematical models that consider human well-being such as thermal and visual comfort are also added. The MPC algorithm then takes forecasts for weather and occupancy into account when numerically optimizing the actuation of the system. All that complexity is already built and tested in the AFC so that users can simply download and use the system without a deep knowledge of the many factors at play.

Developing the AFC at Berkeley Lab

The launch of the AFC is the product of many years of development and testing at Berkeley Lab. An initial ad-hoc implementation was successfully field-tested in 2015, revealing the potential for a meaningful reduction in both electricity cost and peak energy demand. As development continued, the ad-hoc solution was implemented once again using more sophisticated models that better matched real-world environmental conditions.

In 2019, the BTUS team completed another study that analyzed the performance of an MPC controller in a south-facing perimeter office with electrochromic windows for a sunny week during summer and winter periods in both Oakland and Burbank, California. And while the results of the study were significant — a 43% reduction in peak demand and electricity cost savings of 28% — the implementation and improvement of human health factors over state-of-the-art controls proved difficult.

Another transition followed. The Distributed Optimal and Predictive Energy Resources (DOPER) — a package traditionally used to control distributed energy resources such as photovoltaics, battery storage, and electric vehicles — provided the flexibility an AFC needs to optimize for human comfort. A final study to quantify the benefits across all of the continental United States is currently underway, with findings so far suggesting the tremendous potential for peak demand reduction of up to 50% and annual energy savings of up to 30% across most climates.

What's Next for the Advanced Fenestration Controller

The U.S. Department of Energy is committed to further advancing the possibilities of the AFC, and over the next three years, Berkeley Lab will collaborate with industry experts and other stakeholders to minimize the effort required to install such systems. At the same time, the AFC will become smarter by interacting with the electric power grid and making the necessary responses when needed.

If you're interested in learning more about the advanced fenestration controller or helping to shape the future of building controls, please reach out to Christoph Gehbauer, principal scientific engineer in the Building Technologies and Urban Systems Division, at cgehbauer@lbl.gov.

Funding for this research was provided by the Department of Energy Building Technologies Office and the California Energy Commission.