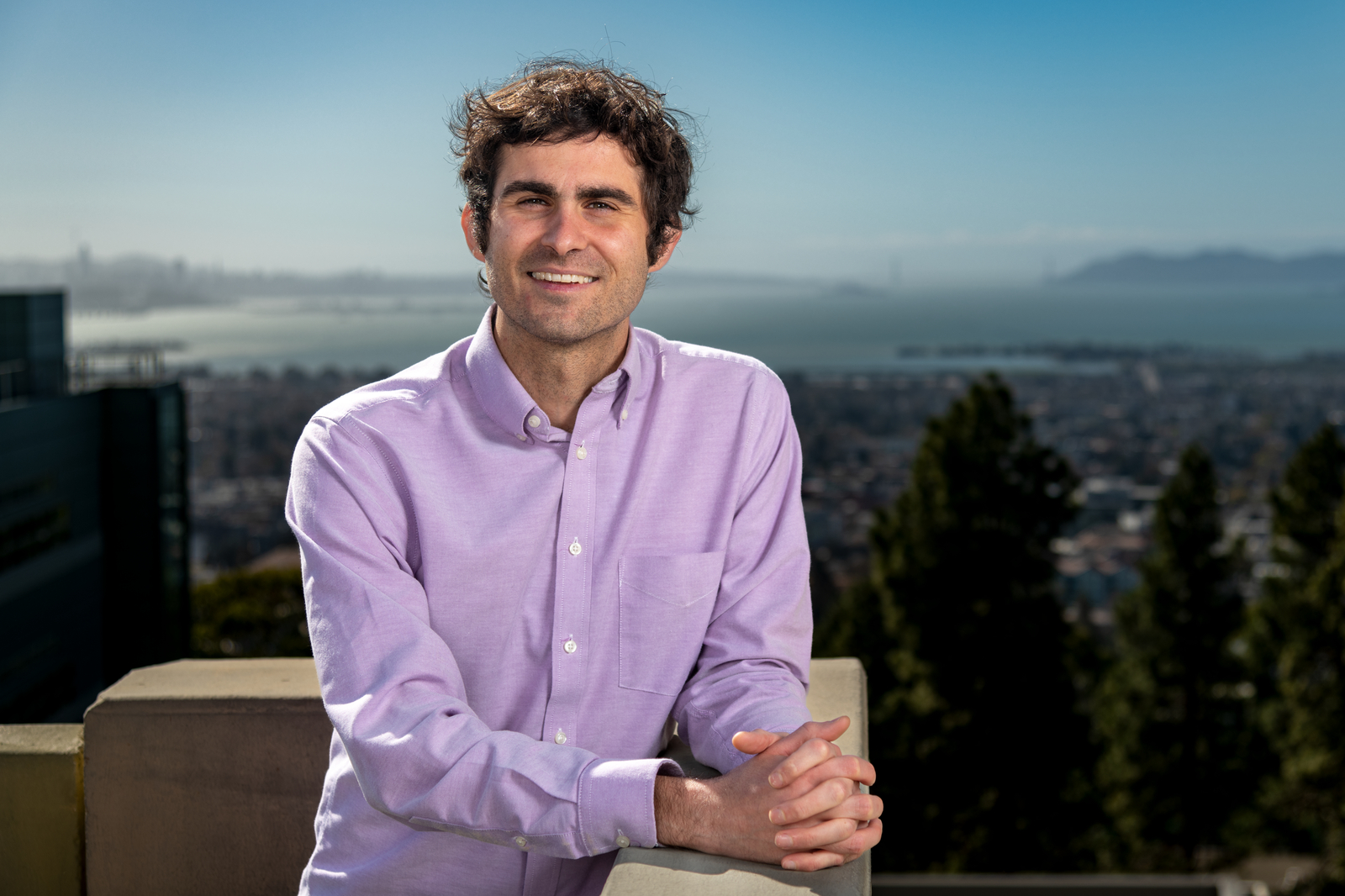 Power plants and other industrial facilities often spew carbon dioxide into the atmosphere like a leaky faucet. As governments around the world are striving to reduce and even eliminate their greenhouse gas emissions and reach “net zero” emissions by mid-century, they’re looking for technologies to help. What if we could somehow suck up all that carbon dioxide, like a giant vacuum cleaner?

A handful of companies have rolled out direct air capture technologies to do just that, filtering out the CO2 from the air or from a point source, such as a power plant. But the technologies now in commercial use can be energy-intensive themselves and expensive to run at larger scales.

Scientists at the Department of Energy’s Lawrence Berkeley National Laboratory (Berkeley Lab) are working on new approaches to achieve direct air capture of carbon dioxide. Andrew Haddad, a researcher in Berkeley Lab’s Energy Technologies Area with a Ph.D. in inorganic chemistry, talks about how a Nobel Prize-winning chemistry concept from more than a century ago inspired his idea for efficiently capturing CO2.

Q. How is direct air capture done now, and why does it need improvement?

DAC typically uses an absorbent in an aqueous solution to bind CO2. These absorbents are generally light metal hydroxides. What happens is, the absorbent – often potassium hydroxide – is fluidized in a water solution and when the CO2 comes into contact with them, it will react with it and make potassium carbonates. This is a really great reaction – it’s very thermodynamically favorable, which is why people use it.

But the hard part then comes when you want to get rid of the CO2 from that material to reuse the absorbent (the potassium hydroxide) for successive cycles of CO2 capture. Because it reacts so well with the CO2, you need to put a lot of energy into that product to break it apart, because it really wants to stay together. It’s very tightly bound.

So they need to heat it to very high temperatures – around 800 degrees Celsius – to release the CO2. That is one of the two biggest cost drivers of this type of technology. The other big cost driver is that carbon dioxide just does not like to be in water. It does not have a good solubility in water. So, they must pressurize the air to get it into the water to do this chemistry, and that costs energy. Those two components lead to this technology costing as much as $600 per ton of CO2 captured. The Department of Energy would like to get that down to about $100 per ton.

Q. So please explain your project and how you overcome these issues.

Our approach is to do this in systems that are not water, but rather, in solvents that are aprotic, meaning it can neither accept nor donate protons. One consequence of using these types of solvents is higher solubility for CO2. For example, the solubility of CO2 in acetonitrile is increased nearly tenfold compared to the solubility in water at room temperature. So that eliminates the need for high pressure.

Another advantage in using these different solvents is we can use a much wider class of CO2 absorbents, called nucleophiles, and not just ones that work in water, but those that are stable in these aprotic systems. (The nucleophile is the chemical that “attacks,” or attaches to the CO2.) The result is using chemistries that have an even greater affinity to bind to CO2.

The third wrinkle is that to desorb the CO2 from the bound material, we leverage electrochemistry. Instead of heating things up to really high temperatures to release the CO2, we can apply a moderate current that changes the electronic environment of the nucleophile to release the CO2. Kind of like how a battery cycles through charge and discharge, we can charge and discharge our chemistries to bind CO2 and then release it. Ultimately, this eliminates the need for high temperature swings and enables an electro-swing mechanism, which can be powered with renewable sources of electricity such as wind and solar.

Q. What are the challenges in getting this to work?

We’re looking at off-the-shelf products that traditionally have not been tried for this type of application but have been more common in classical organic chemistry. We are trying to find the optimal combination of these three components — the solvent, the nucleophile, and an electrolyte, which increases the conductivity of the system so that we can do electrochemistry.

We have a lot of different choices, and while there is some intuition involved, there’s a method to the madness. To screen chemistries, we are using an electrochemical microfluidic cell that allows us to test multiple combinations at the same time. Based on this, the most promising combinations are identified to then make electrodes that can capture the CO2. The major hurdle right now is finding ways to best make and implement these electrodes so that we can capture as much CO2 as possible. Our team also includes Samuel Blau, a computational chemist in Berkeley Lab’s Energy Storage & Distributed Resources Division, who is doing computational calculations to guide our experimentation and material choices.

Also on the team is Michael Connolly, who has expertise in nanostructures and will help us set up numerous cells to run in parallel, drawing on the amazing facilities at Berkeley Lab’s Molecular Foundry. Rounding out the team is Erik Reale, a postdoctoral researcher, and Emna Aidi, a graduate student completing her master’s thesis in our lab. 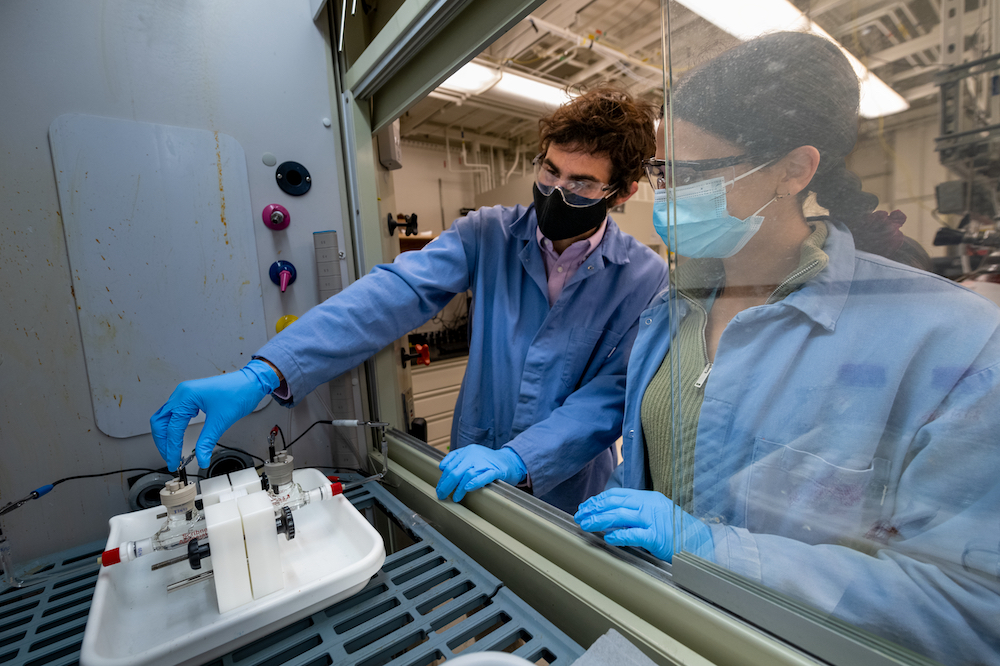 Q. What inspired this particular approach and your interest in chemistry in general?

I came of age when Barack Obama was president. There was a big push around clean energy. As a young person, it seemed like that was going to be a very important part of the future. And that’s when I got inspired. I always liked science, and I felt like there was a way to use chemistry to make green technologies. I did my Ph.D. on hydrogen fuel cells, trying to make cars that run on water.

I’ve always really enjoyed thinking about things from first principles, which I guess is reflected in this system I’m trying to develop now. It is based on a very fundamental mechanism encountered in organic chemistry.

There’s a rich literature about taking a carbonyl group (a double bonded O and C atom) and turning it into something else. This is where I got inspiration from. A French chemist named Victor Grignard won the Nobel Prize in 1912 for this type of chemistry, which we know today as the Grignard reaction. But until recently, not a lot of people have thought about employing this strategy for activating and trapping CO2, although there certainly are other research groups also exploring this avenue of DAC.

Q. What are the next steps, and how long do you think it will take?

We’re looking at a lot of chemistries, and the first goal is to find a good combination of those three components I mentioned. The second goal would be to take these optimized choices and build a working prototype. This stage will involve many iterations of testing under different operational conditions and under different concentrations of CO2 to determine performance metrics. These performance metrics will then be used to conduct technoeconomic analysis models that will inform us on the economic viability of such systems. Ultimately, we would like to test this approach at a pilot scale, but that’s a long way off.

Speaking to the larger scope of carbon mitigation and negative emissions, there really is no panacea. It is clear from the National Academies of Sciences’ research agenda on Negative Emissions Technologies and Reliable Sequestration (2019) that the reductions in net anthropogenic emissions required to meet even the 2-degree Celsius target will be difficult and expensive to achieve, even with foreseeable technological breakthroughs, and will likely encompass many different strategies. Engineered solutions as well as proper land and forest management to increase stored carbon will all be imperative to meeting future climate goals.

This story was originally published at the Berkeley Lab News Center.