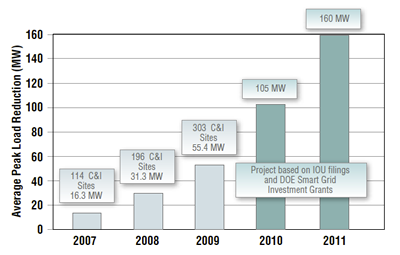 The Demand Response Research Center recently posted several one-page PDFs about its recent work. Following is one of these on the OpenADR specification and job creation.

Open Automated Demand Response (OpenADR) is an information exchange model that facilitates reliable and cost-effective automation of both electricity price and system grid reliability signals to support demand response (DR). OpenADR is developed by the Demand Response Research Center, which is funded by the California Energy Commission's Public Interest Energy Research Program. Since its version 1.0 release, the OpenADR information exchange model has been donated to the Organization for Advancement of Structured Information Standards to be developed into a formal standard by the Energy Interoperation technical committee.

During this period of being released as a specification and its development as one of the smart grid standards, more than 60 building controls vendors for residential, commercial, and industrial facilities have developed products with it and deployed their technologies throughout the country through a variety of DR programs and utility- and government-funded activities.

In California, the California Public Utilities Commission (CPUC) supported deployments of OpenADR first by mandating that all the investor-owned utilities offer automated DR programs, and by providing incentives up to $300 per kilowatt saved. The mandate and the associated deployments created a set of activities that include training, education, outreach on OpenADR, automated DR strategies for different customer classes as well as installations, programming, and testing of a variety of building control equipment.

At a time when the building industry is suffering from the financial crisis and the slowing economy, and when building operators are cutting facilities' costs, OpenADR implementations, with their new focus on peak demand reduction paid by the utility, have helped both facility operators and controls companies continue their activities and strengthen their internal communication. The CPUC's support of at least 70 MW of OpenADR implementations in California by the end of 2011 amounts to a more than $21 million injection into a sector that has been suffering, and to a group of blueand white-collar workers that have been affected by the economic downturn.

Another strong support for OpenADR in California came from the federal government, with the Smart Grid Investment Grant that was awarded to Honeywell. The company received $11 million from the U.S. Department of Energy to deploy 80 megawatts (MW) of automated DR in California using OpenADR. While most of the deployments concentrated in Southern California Edison's service territory, a recent agreement with Pacific Gas and Electric Company (PG&E) will allow some of the funds to be moved to Northern California, to enable between 5 to 10 MW of automated DR in PG&E's service territory.

With this funding, Honeywell created a workforce that includes sales and training specialists, design engineers, and installation and testing technicians. Honeywell works closely with other building controls vendors to educate and fund their activities if the building operators are more comfortable using their existing contacts for AutoDR implementations using OpenADR. Figure 1 displays the reported and projected implementations in California between 2007 and 2011.

As of January 2011, PG&E's AutoDR programs, which utilize OpenADR, are fully subscribed, one year ahead of its goal, and the customers interested in automating their DR have been placed on a waiting list. The main drivers for the adoption of OpenADR are the smart grid standards work led by the National Institute of Standards and Technology, the funding that has been made available through the DOE's Smart Grid Investment and Demonstration Grants, and the reception and fast adoption of energy management and control systems manufacturers and vendors. Moreover, the automation of DR has facilitated the communication of the two disconnected groups, facilities and information technology, creating job growth and advancement opportunities.